Born in Dakar, Laudator studied photography at the Louis Lumière School and at the CE3P in Paris.
After graduating, he settled down there and opened his photographic studio. Following his first published works in magazines, including a photo essay on Ephemeral Arts in Public Places: performance, arts events, street performances, he received a grant from the French Ministry of Culture. He will spend three to four years on that project during which time he photographed nearly 300 artists in over ten European countries.
In 1988, the Paris Transport Authority (RATP) produced two major exhibitions of his work. The first one is a solo show at the Châtelet-Les Halles station, within the heart of Paris. The second one will be a two-year travelling exhibit across France, Quebec and Japan, shown as solo and group events in various public places: museums, galleries, festivals…
His first steps in digital photography date back to 1991. Ever since, Laudator has been using a U.S. 0.7 beta of Photoshop, an Adobe program for which he embarked on a self-study program keeping updated on the various software developments.
From the early 2000s on, he has been progressively using the graphic tablet which has now become one of his main tools : «Today I forgot how life circumstances created the need in me to take photos, to cut them and make them move, run and socialize with one another in order to create new pictures. I naturally adopted that new medium of picture collage and photomontage. That creative work represents my current activity for the press, editing and communication sector». Laudator – The Art of Collage in the Dawn of the 21st Century.

Laudator is now working for clients such as Le Monde, Science & Vie, Citroën, Aviva, Nike, Levi’s, Fleuve Noir, J’ai lu, Eyrolles, BBDO, Mac Cann Erickson, Duke-A Razorfish Company… He has participated in a number of group and solo exhibitions. Recently, his pictures of the new series Daydream – 2009/2011 – were shown at the gallery Théo de Seine in Paris, in the heart of Saint Germain-des-Prés, during the Month of Photography. 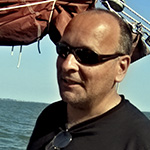